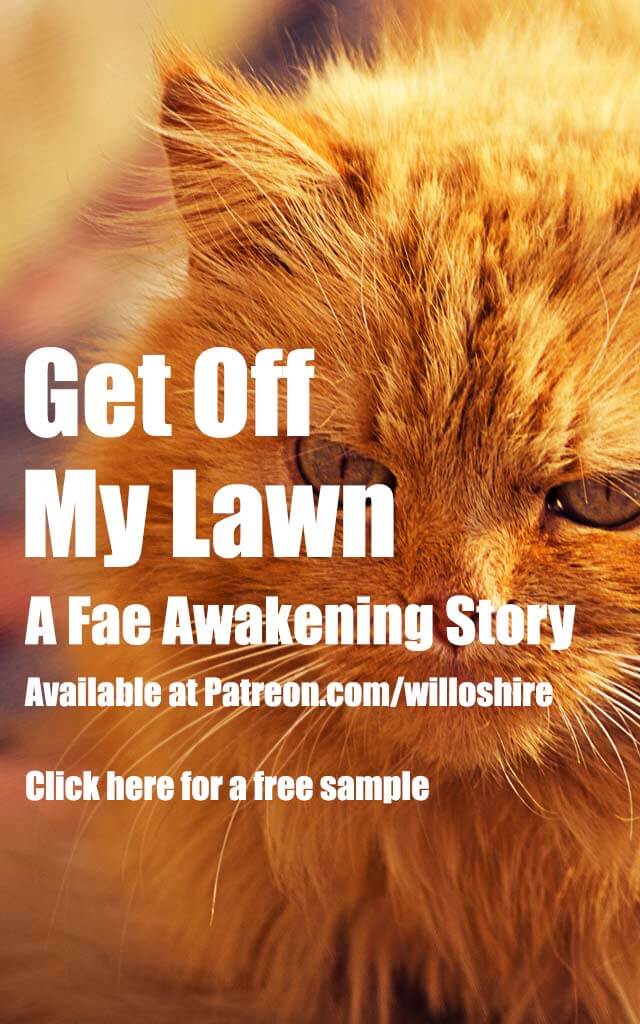 Get Off My Lawn

When their ball disappears onto a neighbor’s lawn, several friends encounter an overweight cat, a shotgun, and an elderly man thought to be responsible for the disappearance of children around the community.

“Stay away from Mr. Boucher’s house.” The warning from Jack’s mother carried the typical, worried emphasis as she sent her son outside to play. A pair of twins recently disappeared increasing the neighborhood’s fear—one of them was to blame.

Knowing his mother’s distrust of Mr. Boucher, Jack called back, “I won’t.” He ran out of the house with a hockey stick in one hand and roller blades in the other.

As he ran into the cul-de-sac, he met his friends, Tim, April, and Steve. Steve rolled around the circle drive, pushing a red ball on the ground with his hockey stick. He flung the ball towards April.

April spun around in her bright blue roller blades. She caught the ball and pulled her stick back to pass it to Tim. A thin, wry smile appeared.

Tim stared at the ground, distracted by the heat lifting from the pavement.

Steve watched her. He nodded his head, the brim of a green baseball cap gave April his agreement.

April slammed her stick against the ball. Her black hair floated in the wind with the turn of her head.

The ball jumped from the pavement, soared through the air, and smashed into Tim’s chest. He clutched his abdomen while grunting.

Steve laughed. He rolled over and said, “That’s why you need to pay attention.”

As Jack reached the culdesac, he asked, “What happened this time?”

Tim caught his breathe. “I—” His hoarse voice continued, “pay—” He gasped for air. “—attention.”

Steve patted him on the back. “That’s why you’re always falling over, right?” He pushed Tim slightly on the shoulder.

April rolled over and offered him a hand. She lifted Tim into the air.

Jack struggled with his roller blades.

As Jack prepared for a game of street hockey, if that’s what you could call it since they mostly circled the culdesac passing the ball between each other, Steve yelled, “Jack, catch!” Steve pushed the ball towards Jack.

The ball skipped along the dented ground as it made its way towards the sidewalk. Jack dropped his laces. He quickly reached to his right side, falling to the ground, as the ball bounced against the cement wall just out of reach. Jumping up, the ball fell to the ground, bounced and landed on the sidewalk. Its momentum picked up as the culdesac fell slightly downhill. Picking up speed, the ball bounced further towards an overgrown walkway at the end of the circle.