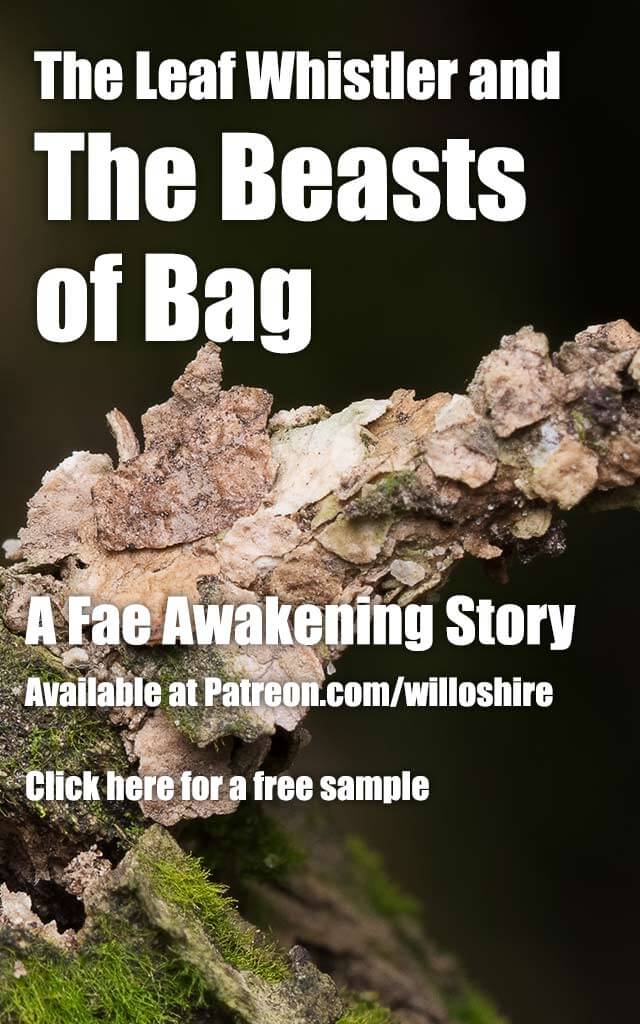 The Leaf Whistler and the Beasts of Bag

Faela slept in his bed, not knowing what terrors lurked nearby. He clung to a soft blanket made from the skin of his recently departed friend, a skin willed to him with his friend’s dying breath. As he slept, he dreamt of the times he flew through the sky with the luna moth, gliding on the winds as the sun peeked above the horizon. He dreamt of the moth’s beautiful green wings flapping in the air while he held onto thin, white hairs covering the moth’s delicate back—the hairs he now used to warm his bed at night.

While the moth soared through the air, the sky shook. The sun vibrated against the horizon with a world quaking underneath the bright light. Trees shattered, exploding as they fell to the ground. Water in the lakes bubbled violently turning into geysers shooting steam into the air.

Faela woke suddenly when a shard of earthen pottery scratched his face in the darkness. He rolled to the side of his freshly made pillow, made from the same skin left behind from his recently deceased friend. Opening his eyes, he peered outside his bed carved into the walls of his home with the roots of an old oak tree supporting the arched ceilings. He peered into the darkness, trying to wake and process the damage caused to his home. The dream bled into reality, shaking the foundations of the oak tree. In the kitchen, acorn pots rolled on the counters, falling and spilling their contents of leaves, seeds, and dried meats on the ground. Faela rubbed his eyes as he stood. The moonlight snuck through his windows, partially lighting the floor. Outside, the world shook.

Struggling to gather his footing, Faela reached for a sturdy walking stick leaning against the wall, only it was no longer there. He felt around the darkness of the floor. The stick found its way underneath the bed as the ceiling cracked while the cabinets and living room furniture shuddered during the tremors.

Picking up the staff, Faela steadied himself enough to walk to the window. He peered outside.

It’s still night. He wondered, There’s no mower. As he looked into the distance at an angle away from his home, he mumbled to himself, “The old man isn’t awake. Lights are off in the house.” He thought, World, what are you up to?

Get Your FREE Short Story

A gang of goblins rob a bank. Chaos ensues…